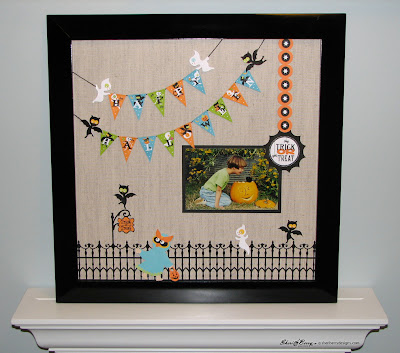 It’s time to take a break from party planning and donate a little time and a little memory to Halloween past. What better way to preserve the past than with a scrapbook page capturing that moment in time? I have chosen one of my all time fave photos of my daughter when she was seven years old and Halloween was just around the corner. We were at the family farm in Oklahoma and Grandma had just gotten a new kitten. It was as though this little kitten knew it was the perfect time for his arrival as the iconic black cat for Halloween, and my daughter was thrilled.
We took action while the opportunity presented itself and found a great pumpkin, wish I could say right from the pumpkin patch at the farm, but honestly it was from the local grocer. Carving began and soon a whimsical face emerged from the pumpkin ready to house the adorable new farm kitten we had named Black Jack.
Full of delight, Shelby quickly snatched up the kitten and placed him in his temporary home while I got my manual Minolta camera ready to capture the moment, and that I did. Many snapshots were taken but the one in this framed scrapbook page is my absolute favorite.
For this memory page I used a variety of images from the Costume Clubhouse sets on LD. To give you an idea of what images were used I thought I would share those specifics with you.
The “Happy Halloween” banner is actually a scaled down version of the CC (Costume Clubhouse) Banners. I simply printed them out at about 1.75" when folded to the tip at bottom and hung them on black string with some of the little bats and ghosts from the CC Graveyard set. I did pop dot the ghosts and bats holding the banners in order for the banners to sway a bit if moved. I also used the bats and ghosts along the fence from the CC Graveyard set. I printed and cut the fence from the CC Fences and attached them to the bottom of the 16 x 16 framed format.
The photo was framed with black cardstock. The vertical band of orange and black dots with white stars is from the CC Borders, simply printed, cut and glued to the background. There is also a medallion type label reading “Trick or Treat” at the end of the border and just over the corner of the photograph. That label is from the CC Gift Tags. Again, I printed, cut and attached it to the board, using a bit of foam core to lift it from the background.
The finishing touch was the costumed owl which comes from the CC Characters. I also lifted the owl with a bit of foam core to show it visibly in front of the wrought iron fence. The only thing left to do to show off the scrap~happy halloween memory was to frame it in the black 16 x 16 frame and find the perfect place to keep it.
Now, just for fun I thought I’d share a close up of Shelby and the kitten and a few more snapshots from that happy autumn afternoon at the family farm. Enjoy and happy scrapping! 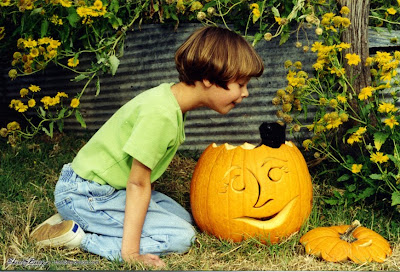 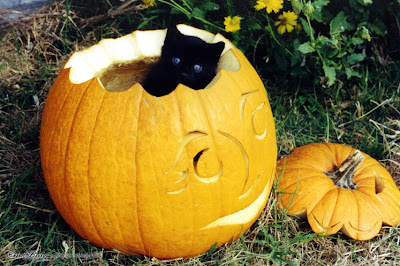 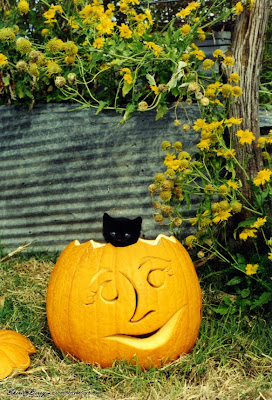 Posted by Sheri McCulley at 8:50 PM

Oh, I remember that so well. Wish we could go back in time for a day or two!