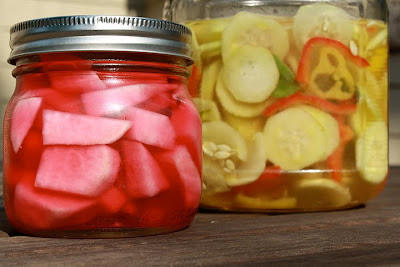 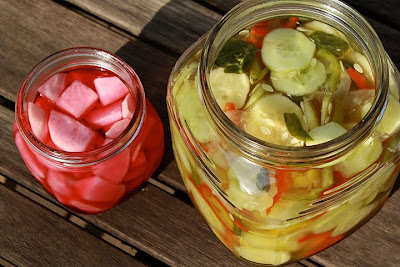 Pickled Cucumber and Pepper Recipe
2-3 cucumbers (peeled and sliced)
1 red or yellow pepper (cut into half-rings)
1 small Walla Walla Sweet onion, sliced (I omit the onion, but my mom swears by it:)
fresh basil leaves
a few sprinkles of dill
1 cup cider vinegar
1 cup water (or equal parts with vinegar)
1 tsp salt (more or less to taste, but should be quite salty)
Place all ingredients in a quart jar (larger if needed), stir to mix and refrigerate. The vegetables will take on the pickled flavor after a few hours and can be kept for up to a week or more in the refrigerator but will not keep their crispness. Don’t worry, you will eat them up within a day or two anyway. :)
So, don’t turnip up your nose on these pickled treats until you give them a try. Think of them like every other pickled veggie you’ve ever eaten~but not!
Posted by Sheri McCulley at 12:33 PM

Sheri, I've got to try the pickled beets. I have tried and tried to make them like "Mom's Cafe" in California, to no avail. (They wouldn't give me the recipe.) I think I have discovered the trick---the garlic. I'm going to try them again as soon as I get some turnips. By the way, your pictures of the turnips and cukes look so pretty. And the "Don't turn up you nose---" is very clever too. Thank you so much for sharing your recipe!

Sheri....we did the pickles and love them. Ate them half gone tonight with our egg salad sandwiches...Thanks for sharing the recipe with us. You are a grand sis-in-law!

I'm going out to buy turnips now!! That looks good!!

Yum, I am going to have to get Dick to try the pickled turnips - they sound tasty! I actually like turnips - not raw, but boiled, drained then add a little pepper. Maybe not so appetizing in these 100+ degree temperatures, but in fall and winter this makes for a healthy and low calorie side dish. See if you can stomach the cooked ones sometime!