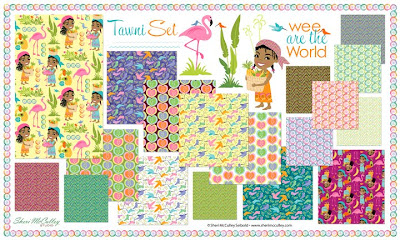 Meet Tawni, the island girl, ninth wee character in the Wee are the World series. She comes to us from the West Indies, or better known, Caribbean. Her islands are full of charm; canvased with a beautiful array of colors, and dotted with tropical birds, large and small. 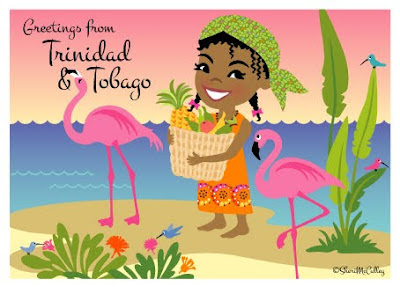 Tawni was influenced by my very best childhood friend, Stephie, an island girl herself. She and her family had moved from their tropical paradise in Trinidad and I had just moved from the midwest were we met and became immediate besties in the Pacific Northwest, a land unfamiliar to either of us.
I have wonderful memories of being with her family eating fried plantains (okay, not my favorite food:) and drinking tropical smoothies, which back then we called health shakes. I learned new words and phrases said in the most lovely accent, to my ears, which was both British and Island-ish, as my young mind would hear them. I would try to imitate it, but with an “Okie from Muskogee” drawl, it just didn’t have that charm, nor did I.
Steph and I came from completely different backgrounds and really didn’t seem to have that much in common, until we did. And boy did we. We turned culture-clash on its head when we became besties. We were, and still are today, two peas in a pod. No one makes me laugh like Steph does. No one makes me think like she can. No one makes me appreciate life like little Stephanie did all those years ago and still does today. My world is more beautiful with her in it.
Steph has two older sisters who actually are twins, but she will always be my twin, separated at birth, but with a better accent.
Posted by Sheri McCulley at 3:20 PM

I love the Island Girl, Sheri. Lots of memories flood my mind when I think of you and Steph. Wonderful memories! And it's great you are still besties.

So cute! But there are no flamingos in most Caribbean islands, especially Trinidad :(